Film / The Killer Inside Me 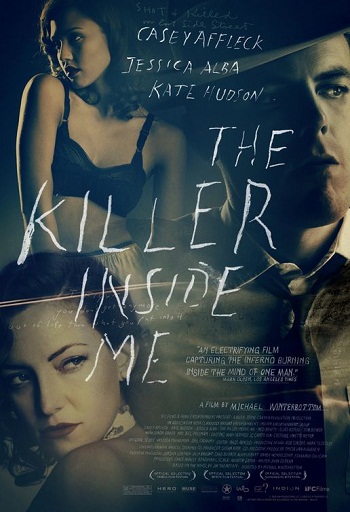 The Killer Inside Me is a 2010 psychological horror film by Michael Winterbottom based on the novel by Jim Thompson. It stars Casey Affleck (Lou), Jessica Alba (Joyce) and Kate Hudson (Amy). It is the second film adaptation of Thompson's novel, the first being released in 1976 and starring Stacy Keach, Susan Tyrrell, and Keenan Wynn.

This film is unflinchingly violent and deliberately disturbing. It begins when the polite, seemingly normal Lou Ford is sent to encourage local prostitute Joyce Lakeland to leave town. The confrontation leads to him beating her with a belt, and their romance begins. Together they concoct a plan to scam money from the wealthy Chester Conway. But Lou secretly had an even darker plan for Joyce. He beats Joyce unconcious and shoots Chester's son, making it appear as if the two of them got into a fight. From there he must keep commiting more murders to cover up his crimes, and also, because he enjoys it.

Not to be confused with The Killer in Me.