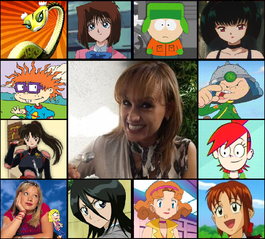 Liliana Barba (in the middle) and some of her roles.
Advertisement:

Liliana Barba Meinecke (born January 16, 1973 in Mexico City, Mexico), better known as Liliana Barba, is a Mexican voice actress and dub director who started her voice-acting career in 1997 at the age of 13-14, with her voice directing career beginning three years later. Her most popular roles are those of Plucky Girls, often pretty tomboyish or at least assertive. Also, the voice for many of the characters performed by Lucy Liu. She has also voiced male characters.

She was once married to fellow voice actor Rodrigo Díaz, but they have since divorced. Their son, Oliver Díaz, is also a voice actor.

Not only does Barba speak in her native Spanish, but she also speaks Portuguese and English.