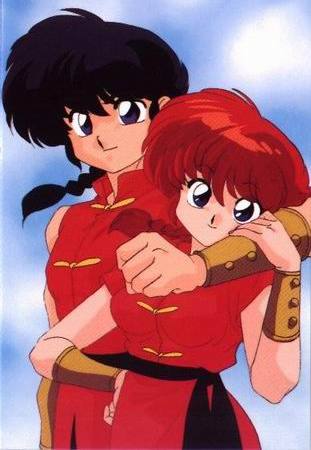 The main character of the series. A teenage master of Supernatural Martial Arts, generally assumed to be sixteen years old. Like most of the other cast members, a very contradictory character, possessing both positive and negative attributes — he can be sensitive and thoughtful one moment, and brash and insulting the next. Cursed to turn into a girl whenever he's doused with cold water because of his father's stupidity, then bound in an Arranged Marriage he never even knew about until he was practically at the girl's doorstep. Needless to say, he doesn't get on too well with his father.

When it comes to Akane, Ranma's general attitude and Akane's mild dislike of men initially drives them to clash more often than not. But, as the story goes on, he gets to know her better and ends up genuinely caring for her as a person.