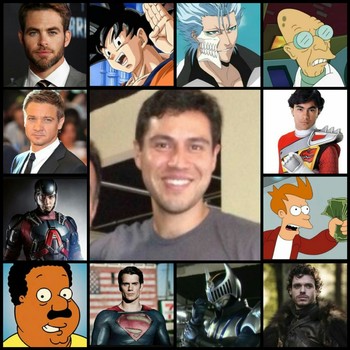 Edson Matus (in the middle) and some of his roles.
Advertisement:

Edson Enrique Matus Macías García (born August 30, 1987), better known as Edson Matus, is a Mexican voice actor. His career began in 2002 working for the now defunct Intersound and as one of the promotional voices of the Sony Channel. He was once married to fellow voice actress Marisol Romero, but they have since divorced. His role range includes Deadpan Snarker, The Stoic and even Plucky Comic Relief.

While he is considered a good voice actor, people never forgot that he replaced Mario Castañeda as Goku in the first 98 episodes of (the infamous in Latin America) Dragon Ball Z Kai and Benjamín Rivera as Fry in Futurama (seasons 5-7). Although some people still forgave him because it wasn't exactly his fault; the studios were guilty for everything: For Dragon Ball, Toei didn't want to pay for the originals; and for Futurama, the studio was going through a workers strike.

He is best known for voicing Hawkeye in the Marvel Cinematic Universe, Superman in the DC Extended Universe, Tyler Navarro in Power Rangers Dino Charge, Vincent Chase in Entourage, and Blaine Anderson in Glee, and is the semi-official voice of Jeremy Renner and Evan Peters in Latin America.

As the VA for Jeremy Renner

As the VA for Ben Barnes

As the VA for Evan Peters