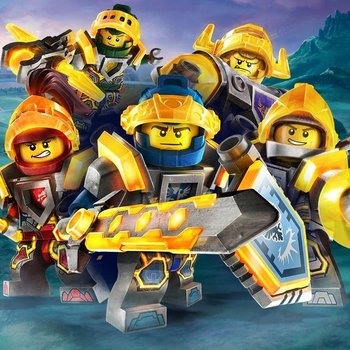 Nexo Knights is a Castle-esque LEGO Theme which was released in 2016. It's the successor to Legends of Chima, with an All-CGI Cartoon aired on TV, which lasted for four seasons. The toyline lasted until 2018, when it was quietly cancelled.

The theme's a hybrid of Castle and sci-fi, where the six heroic knights must stop the evil Jestro from summoning an army of lava monsters that are attacking the kingdom of Knighton, which has advanced technology but a medieval society.

There's a recap page being constructed.

Tropes that apply to the sets and television series: