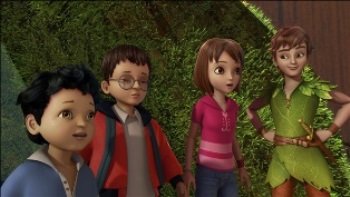 From left to right: Michael, John, Wendy and Peter
The New Adventures of Peter Pan is a 2013 CGI cartoon by DQ Entertainment, the same company that helped produce Casper's Scare School and Iron Man: Armored Adventures It is produced by Tapaas Charavarti and directed by Augusto Zanovello.

Set in the 21st Century, the story revolves around a more modern incarnation of the Darling family (smart phones and laptops both make appearances in the London segments). The story alternates between modern London and the ageless Neverland, and the Darlings travelling back and forth between the two.

In many ways, the show can be seen as a more lighthearted spiritual successor to Fox's Peter Pan, with both focusing on the day to day interactions and adventures of the cast as opposed to retelling the Peter Pan story or trying to serve as an origin story.

The New Adventures of Peter Pan contains examples of: