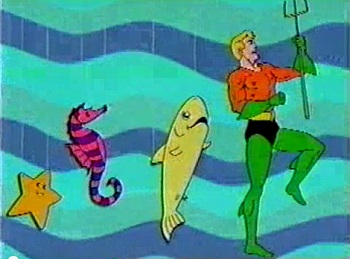 Those friendly fishes are dead... Creepy....
It's time for sunshine and happy smiles
Chocolate rainbows and friendly fish
Come on and join your friends.
At the Aquaman & Friends Action Hour!
— English dub's In-universe Intro song
Advertisement:

The Aquaman & Friends Action Hour (El Show de Aquaman y sus amigos lit. Aquaman and friends' show in Spanish) is a 2003 Latin American-produced show that suggest what would have happened if Aquaman from the Super Friends universe were to conduce a kid's show. If you are familiar with the concepts behind Space Ghost Coast to Coast or Harvey Birdman, Attorney at Law, then you probably know what to expect.

The series lasted a total of 7 episodes, transmitted during advertisement (which implies that each episode was about 2-5 minutes long). Shamefully enough, the series was never transmited outside LatAm.

It's worth mentioning that some episodes were Dubbed in English, so it's possible to find online if you look for them hard enough.