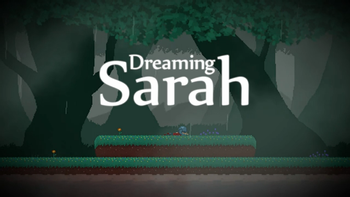 Sarah, at the start of the first area.
Advertisement:

and inspired by Yume Nikki. You play as Sarah, a comatose girl who explores various dream worlds in a search for effects to advance further in the dream world and try to wake up.

Talks of a sequel began towards the end of 2017. In February 2018 it was officially announced and given the title Awakening Sarah. A trailer has been published

is available. Between both installments, a Game Boy interquel named Wishing Sarah

Has nothing to do with Dreaming Mary, despite the similar title and premise.