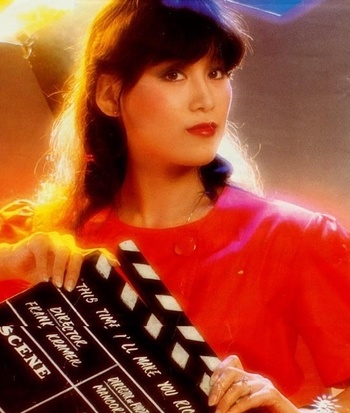 Adorable, until she breaks your neck with her fingers.

Trained in martial arts and Chinese opera ever since age 4, Sharon is skilled in jeet kun doe, western boxing, karate, and was even called the "Lady Jackie Chan" in the 1980s. Her career mostly started out in TV series or period dramas from Goldig Films and Shaw Brothers, but as the decade moved into the 90s, and Girls with Guns action films started gaining traction for action film junkies, Sharon would star in her first movie of this genre, Angel Enforcers, in 1989 before showing up in similarly-themed movies alongside Moon Lee (Princess Madam), Cynthia Khan (Angel on Fire), Yukari Oshima (Deadly Target), Sibelle Hu (The Way of the Lady Boxers) and the like.

Sharon Yeung is still active in making movies, although her more recent films are mostly low-budget dramas and decidedly in the non-action genre. She has a daughter with her husband, a film producer.

In 2018, Sharon is involved with an on-set accident

caused by a fire breaking out on the set of Amazing Spring, while filming in Malaysia. Suffering seven percent of second-degree burns on parts of her body, she nevertheless soldiered on and shows up in press conferences.

In 2020, Sharon Yeung is the winner of the 2020 Hong Kong Outstanding Contribution Award in stuntwork and action cinema. Check her receiving her award alongside Jackie Chan here

Tropes related to this performer