Film / The Way of the Lady Boxers 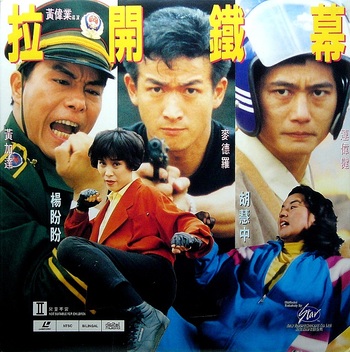 It's either her way, or the high way. note  Sharon Yeung as Li Tong (Bottom - L), Sibelle Hu as Chiang-hung (Bottom - R)

The Way of the Lady Boxers, also known as Madam the Great or Angel Kickboxers, is a 1993 Girls with Guns action film combined with elements from Buddy-cop films, previously exemplified by Yes, Madam. Directed by Wong Wai-Yip, starring Sibelle Hu and Sharon Yeung, the movie features two elite police officers, respectively from mainland China and Hong Kong, teaming up to solve an arms deal.

Inspector Li Tong (Sharon), investigating the smuggling operations of firearms into Hong Kong after a police raid, uncovers the truth that the gunrunners responsible are from mainland China. The Chinese government responds by sending their representative, Detective Chiang-hung (Sibelle) to assist. While both ladies are reluctant to co-operate, due to Li-Tong being a hothead against the straight-laced Chiang-hung, soon they started working as a team as their investigations inadvertently results in both of them being sent to mainland China to confront the gunrunning gang in their headquarters.

The Way of the Lady Boxers contains examples of: