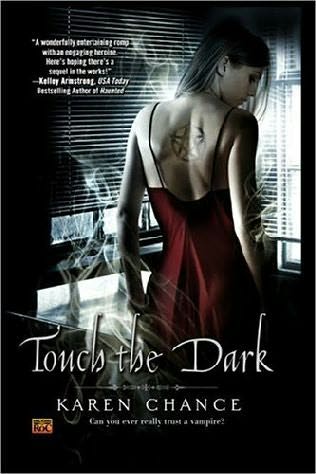 My attitude could be summed up pretty simply: I was alive, they were not, go me. Surviving at Tony's taught you to be practical about these things.
Cassandra Palmer is an urban fantasy novel series by Karen Chance, starring Cassandra "Cassie" Palmer, an orphaned clairvoyant raised by a vampire mob boss. Cassie ran away from him three years ago after she discovered he killed her parents when she was a child. But at the start of Touch the Dark, Tony has found her and Cassie finds herself forced to accept the help of the Vampire Senate, which does not come free. Cassie is to be the next Pythia, the world's chief clairvoyant, time guardian and ultimate judge of the supernatural world, and Cassie is the first Pythia in centuries that has not been indoctrinated since birth by the mages' Silver Circle and is thus free of their control. And they do not like that, not at all. If the Pythia is not under their control, then they will make sure the power passes on to someone they can control. But there are other players in this game nobody knows about yet.
Advertisement:

The series has a spin-off that stars Dorina Basarab, the dhampir (half-human, half-vampire) daughter of Cassie's love interest Mircea, and master vampire Louis-Cesare. Characters from both series interact and cross over, with most of that occurring later in both series.

This is a long-running series, so spoilers from earlier books may be unmarked.