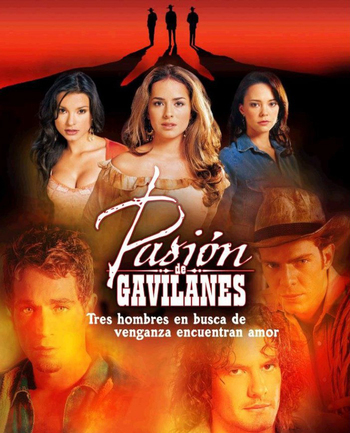 The Reyes brothers with the Elizondo sisters
Advertisement:

Pasión de Gavilanes (literally Passion of the Sparrowhawks, known internationally as Hidden Passion) was one of the most popular Telenovelas of its time. A remake of the telenovela Las aguas mansas, it has a Hotter and Sexier vibe as well as a more comedic tone, straying from the political and historical context of the original. Still, the main story remains largely the same: it all starts with naive and young Libia Reyes having an affair with Bernardo Elizondo, the much older, rich owner of a horse ranch.

She believed him to be divorced and was certain he would marry her, especially after finding out she was pregnant with his child and her brothers, Juan, Óscar and Franco, demanded he take responsibility. Unfortunately, even though Bernardo was more than willing to go forth with their plans as well as finally putting some order in his own household, he loses his life in a freak accident. In her shock for the abruptness of his passing, Libia recklessly goes to the Elizondo house where she finds Gabriela, Bernardo's lawful wife, who in her own grief treats her harshly and cruelly, humiliating her and expelling her from there. Libia, hurt and desperate, jumps from a bridge to her death.

After this event, her brothers vow to take revenge on the Elizondo family. They manage to enter the household as construction workers with the aid of the housekeeper, Eva, who has her own grievances against Gabriela. However, during their time there, they end up tangled in the lives of the three beautiful daughters: Norma, whose marriage with Fernando Escandón is more strained than ever; Jimena, fun-loving and flirty that likes to enjoy her freedom and Sarita, the stern and no-nonsense overseer of the ranch.

It spawned many remakes and adaptations, with the two better-known ones being the 2008 Mexican adaptation Burning For Revenge (Fuego En La Sangre) and the 2014 Spanish Telemundo adaptation A Passion for Revenge (Tierra de reyes).