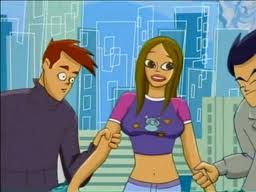 Nothing says love like being yanked by the arms.
"Simplemente Rita" (Simply Rita) was a very unusual combination of a telenovela (Latin American Soap Opera) and a cartoon show. A scathing parody of Telenovela clichés (as well as of the life of immigrants in the United States), it was produced by a Colombian animation company for the International Telemundo network from 2001 to 2003. It was in Spanish and ran for 30 episodes. It still reruns on some Telemundo affiliates.
Advertisement:

The story was about a young woman named Rita who goes to New York City to try to achieve her dream of becoming a famous singer. She falls in love with a clueless former rich brat named José Gabriel who is also an immigrant, and her musical career is manipulated by Pete Duke, a candidate for city mayor who is desperately trying to earn the votes of the Hispanic community. Hilarity Ensues.

You can watch it online (in Spanish) here [1]