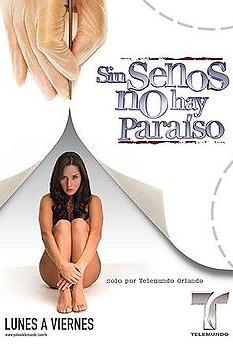 A story about drugs, action and breasts.
Advertisement:

Catalina Santana (Carmen Villalobos), a young woman in Pereira, Colombia, is willing to risk everything in order to escape the poverty she lives in and fulfill her dreams - even if this means putting her life and her integrity in jeopardy. Her mother, Hilda (Catherine Siachoque), a lovely hard working woman with no resources to provide her children with luxuries, expends boundless energy in her efforts to push both her children, Catalina and Byron (Juan Diego Sánchez) to prosper. In spite of their mother's efforts, Byron and Catalina's situation is filled with poverty and need.

Being sold on dreams of riches and a life of luxuries by the madame of the neighbourhood and childhood friend, Yésica Beltrán, a.k.a "La Diabla", Catalina decides to enter the world of prostitution in hopes of acquiring enough money to pay for breast implants, wholeheartedly believing that by having them, she'll be able to get out of poverty along with her family. At the beginning, she's dazzled by the parties and the power of the drug lords that request them but, later on, she'll slowly realise that her ambition and naiveté led her to a path filled with pain and betrayal.

In the end, she loses everything she once held dear and loved, prompting her to make one last desperate choice.

A sequel, Sin senos sí hay paraíso ("Without Breasts There Is Paradise") began airing in July 2016.