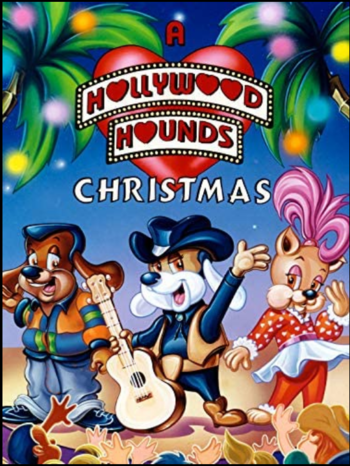 A Hollywood Hounds Christmas is a 1994 animated Christmas Special by Kent Butterworth.

The week before Christmas, a dog named Dude (Jeff Bennett) has arrived in Hollywood California from Nashville, Tennessee, with just his guitar and his dream of making it big in Tinsel Town. No sooner than he arrives does he find himself in trouble, only to later be pulled out of it by a local dog named Cuz (Christopher Broughton).

Cuz takes Dude to live with him and his owner, Michael (Theodore Borders), who always takes in strays. He gets acquainted with Michael's family, which includes his dad (John Welsey), and their cat, Rosie (Candi Milo). Sadly, Michael's dad has announced that he's lost his job because the school he worked at cut the music program. This'll mean tightening of budgets, which may mean no presents for them this Christmas. The concept of a Christmas with no presents is utterly unthinkable to Dude, who wants to help them.

Luckily, the Mushy Chum company is holding their annual Christmas Commercial auditions, which includes a shopping spree at the store of the winner's choice, and $1000.00 cash as a part of the prize. Dude decides to enter and win the prize money for Michael by himself, but Cuz and Rosie get it in their heads to tag along. One can guess the lesson to be learned from these events.