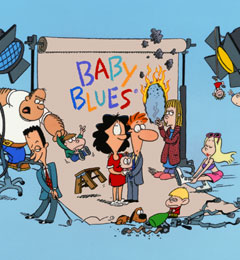 A short-lived cartoon on The WB based on the comic strip Baby Blues. It lasted only 13 episodesnote it really had 26 episodes, but only half made it to the air as a midseason replacement. The first 8 episodes aired between July and August 2000, with the final five airing on Adult Swim in 2002.
Advertisement:

The show was subjected to much Executive Meddling to make it more of a Simpsons-com Family Guy clone. The strip's creators weren't too thrilled with the results

and neither were most of the audience. Not only was the show a critical failure (especially when compared to the more warm comic strip), but it suffered very poor ratings. Adult Swim in its early years aired this show as part of a trio of short-lived WB network animated shows from the late 1990s into 2000 (this show, The Oblongs, and Mission Hill), but now, the show has largely faded into obscurity, and is the only one of the three to not see a home media release.