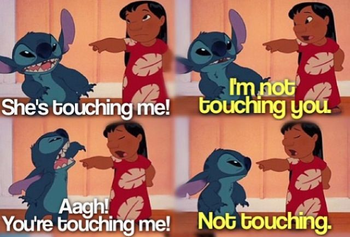 "TOUCHING ME!" "It's free air."
Advertisement:

Being annoying is a very effective way to get under someone's skin, and it's especially so when it's done intentionally. Whether it's a repetitive sound or action, or whether it's actually done to someone or just in their presence, it's almost as distressing as actually causing physical injury. At its most innocent, it can be just done to pester someone, usually for attention or ribbing, and can also be a very effective way of getting what you want. Sometimes it's done to get a kick out of the target's discomfort. At its most malicious, it's an effective tool for psychological torment, and can even be a torture technique.

Common ways of doing this involve repeatedly making a loud or unusual sound, or a physical action such as touching someone repeatedly in a particular way. One technique children are fond of is doing or saying something repeatedly until the target (usually a parent) gets so exasperated that they give in to what's wanted, if only to get the noise to stop. When traveling, "Are We There Yet?" can fall into this if it's said enough.

A favored tactic of the Annoying Younger Sibling and The Bully. Bullying a Dragon can also be done with this. Has a similar effect on the victim as a Brown Note. Can overlap with Cool and Unusual Punishment.

There are also a few Internet-specific tropes:

After several overs, Slater got impatient and holed out to deep midwicket. As he trudged off, he glared at Warne and Berry, who said in unison "Kaboom!"

I'm not touching you!

Lilo and Stitch argue with each other to Nani's annoyance.

I'm not touching you!

Lilo and Stitch argue with each other to Nani's annoyance.