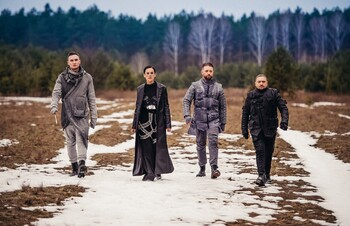 Go_A is an electro-folk band from Ukraine, best known for their participation in the 2021 Eurovision Song Contest held in Rotterdam, the Netherlands, as well as being the intended Ukrainian act for the cancelled 2020 contest. Their name combines the English verb "Go" with "A" (the capital Greek letter Alpha, meaning "beginning") to form the phrase "go back to your roots", encapsulating their signature meld between modern and folk music.

The idea for a musical project combining traditional Ukrainian sounds and modern production first came to producer and composer Taras Shevchenko in 2011. He started recruiting musicians the following year, including choir director and folklore expert Kateryna Pavlenko, notable for her use of the traditional "white voice" singing technique. They had their first success with the song "Vesniaska", which won the competition "The Best Track in Ukraine" in 2015.

On February 22, 2020, the band won Vidbir, the Ukrainian national final to choose its Eurovision act, with maximum points from both juries and public. They were set to represent their country in Rotterdam in May 2020 with the song "Solovey", but for the first time in history the contest was cancelled due to the rapid spread of the COVID-19 Pandemic in Europe.

The same day as the EBU announced the cancellation, the Ukrainian broadcaster confirmed Go_A as their representatives for the 2021 contest. Performing in the first semi-final with the song "Shum", they became the first act to enter a song entirely in Ukrainian. They qualified for the grand finale on Saturday May 22, where they got second place in the televote (right after overall winners Måneskin from Italy) and fifth place overall. After the contest, "Shum" became an unexpected worldwide sensation, topping the Spotify Viral 50 list and being the first song in Ukrainian to crack the Billboard Global 200 chart.