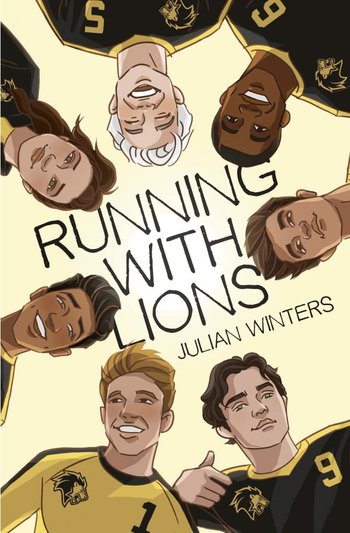 Running with Lions is a 2018 Young Adult Queer Romance novel by Julian Winters. This novel is his debut novel.

Sebastian Hughes, Bloomington High School Lions' goalie, is about to start his senior year in high school but he's more scared than excited - he has no idea what his future looks like after high school, he still has unresolved body image issues, and his girlfriend left him. Also, he's starting to realize that he also likes boys. Thankfully, his coach makes it clear that the team is welcoming to all, no matter what their sexuality is. But during summer training camp, Sebastian finds it hard to be himself, especially that his former childhood friend Emir Shah joined the team and is acting frosty towards everyone, Sebastian in particular. Throughout the summer, Sebastian works hard to get Emir to open up to the team, as well as deal with his own attraction to Emir. During late-night practices and early morning runs, Sebastian and Emir get closer to each other as their connection goes beyond just teammates.

Tropes in the book include