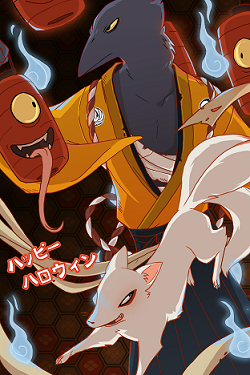 "Halloween and molting week are the only times he’s allowed to dress like an unkempt hoodlum" - Jisuk
Karasu is a mythological web novel following the life of a tengu monk in feudal Japan, by artist Jisuk Cho. The title translates to 'Crow' in Japanese.

The human and the monsters have always treated each other with contempt. So when Shichi, a Tengu monk under strict mentorship treated a human women spraining her leg after falling into water while he was out gathering herbs as usual, things start to go sideways for everyone involved...

The story, original art from the author and merchandise can be found here: http://jisukcho.com/karasu/