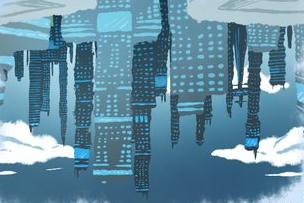 Oh, good.
"So, all I have to do is finish this device, recruit a bunch of strangers to come back to Phaeton, use them to do intel and even break into government HQ if so necessary, and find out more about the Switch and if there's a way to reverse it! Oh, and take down the evil government so we can return Phaeton to a better time, that too. Shouldn't be any trouble at all!''
— Gene Hawkins
'What would you do if, one day, you found your entire world had flipped upside down... with a bottomless expanse of sky below and, above your head, the very ground you used to walk on?'
Advertisement:

The city of Phaeton used to be perfect; its people content, its government fair, and its way of life normal and easy. Nothing could have prepared its people for “The Switch”, an event which rocked their world and turned their world upside down... in more ways than one.

No-one in Phaeton can seem to remember The Switch exactly, if at all. All that is known, is that one minute everything is fine, the next, gravity reversed.

Since then, things haven’t been the same. Walkways and ropes swings and pulleys have been installed to get from one place to another. Contact from anywhere outside Phaeton has been lost. It is no longer safe to go beyond the city, for you may fall into the sky. A new government has risen to power, headed by the mysterious Regent Black, and is enforcing a dictatorship on the significantly reduced populace in the wake of the catastrophic Switch through the use of ‘Polis’; the police, secret police and army of Black’s regime all rolled into one.

Anyone who defies Black, or tries to figure out what exactly happened in The Switch, or is of particular interest to the government, is arrested without trial.

But a resistance has risen, and with a device able to generate portals to other worlds, they aim to bring in help from beyond…

The Switch is a cyberpunk / dystopian Original Character Tournament where you must explore the city of Phaeton, fight other competitors to prove your strength and trustworthiness, and find out why The Switch occurred - and if there is a way to reverse it!

The Switch is brought to you by: Hipster-Coyote

and can be found on deviantArt

Auditions for The Switch OCT opened in 2012, the final results were revealed in January 2014; the winner was pokesam

with Kiff and Consience

Basic Tropes in The Switch: