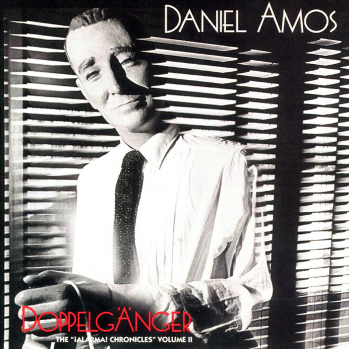 "Mannequin left! Mannequin right! Do the mannequin, day and night!"
Two of me, two of you
two of us, two by two
the double life we live...
— “Distance and Direction”
Advertisement:

Doppelgänger (The Alarma Chronicles Volume II) is Daniel Amos’s fifth studio album, released in 1983. It continued the New Wave Music exploration from their previous album, but this time with more of an organic rock band sound: the low end is much thicker, and there’s more emphasis on Jerry Chamberlain’s big guitar riffs and solos. Sonically, it was DA’s darkest-sounding work yet—and in the years to come, only Fearful Symmetry would rival it in that regard.

Lyrically, Doppelgänger had two themes, appropriately enough. On the one hand, it continued ¡Alarma!’s satire of American Christianity, this time focusing specifically on televangelists, criticizing their shoddy theology and predatory ministries. (And this was four years before the scandals that brought down Jimmy Swaggart, Jim Bakker, and Robert Tilton—a time when very few Christians dared to publicly speak against any televangelists.) On the other hand, Terry Scott Taylor admits that he isn’t much better than those he’s making fun of. So all those criticisms of corrupt preachers are also confessions of his own darker half. And the story in the liner notes

picked up where ¡Alarma!’s story left off: in this installment, Taylor’s Author Avatar has a vision of himself, and he’s horrified at what he sees.

This was followed a year later by Vox Humana.

Other versions
1992 CD reissue: has the original tracklisting, plus three bonus live tracks: