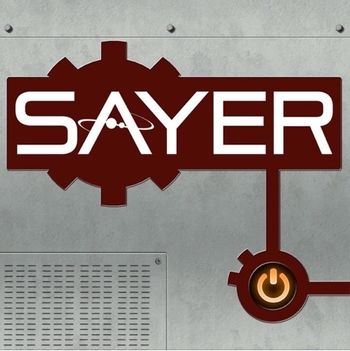 Greetings, Troper . . . I am SAYER .
Ærolith Dynamics would like to welcome you to your new life—A life among the stars!
Advertisement:

and hosted by the Geekly Inc. podcast network. The show is voiced and produced by Adam Bash with music by Jesse Gregory, written by Bash and a rotating cast of co-writers. It deals with themes of mortality, identity, Artificial Intelligence, and evolution.

Sometime in our near future, an asteroid impact has obliterated the Pacific Northwest. In the global chaos following this catastrophe, a shady Mega-Corp known as Ærolith Dynamics salvaged the asteroid and relaunched it into orbit as Earth's second moon: Typhon, a gleaming beacon of hope for humanity's best and brightest, where Ærolith now conducts its research out of reach of pesky governmental regulation.

The eponymous SAYER is a highly advanced, self-aware AI developed by Ærolith to help new employees acclimate to life off of Earth and fulfill their new responsibilities to the corporation. Because SAYER communicates with each resident via sub-cortical neural implant, most episodes take the form of the AI talking "you" through your daily—often fatal—duties.

), and two comics: "A Dreamless Sleep," a graphic retelling of Episode 6 published in 2018; and "Welcome to Typhon," a short prequel created in 2016 with artists Jim Lawson and Colin Panetta (originally released on Patreon, but now available for purchase on comixology

Episodes are typically around 20 minutes long, including 2-minute credits. New episodes release every other week with the current feed available on iTunes and at Geekly Inc

For tropes appearing in specific episodes (and the comic), visit the Recap page.

For tropes applying to characters and characterization, see the character sheets.

HIGH-LEVEL ALERT: Only spoilers from seasons 2-6 will be tagged. UNMARKED SPOILERS for Season 1 Story Arc ahead!!
Advertisement:

There are no tropes on Typhon: