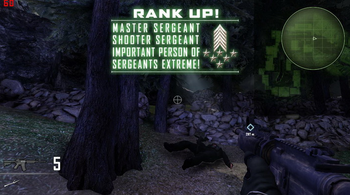 The next stage is "Sergeant of The Master Sergeants! Most Important Person of the Extreme Sergeants to the Max!"
"War... war never changes. Or does it? The war has changed ...did it? The answer is no! Unless it is yes! No, of course it is! Is war! Yes! No! Yes?"
—The opening narration.
Advertisement:

Duty Calls: The Calm Before The Storm is a playable parody of the Call of Duty franchise (specifically the Modern Warfare games) and those that follow in its footsteps such as Battlefield: Bad Company and Medal of Honor, poking fun at some of the most pervasive, cliched tropes in modern military shooters with an extremely short campaign (roughly five minutes in length). You, the player, must storm an enemy base, witnessing the brutal horrors of war and the unending monotony of shooting uniform-clad soldier after uniform-clad soldier with the same boring weapon, ranking up before taking down the enemy leader and securing the nuclear missile bomb, ensuring the United States' victory over enemy forces once again.

In actuality, the game is a covert advergame developed by People Can Fly, developers of Painkiller, to advertise Bulletstorm, to emphasise the things they didn't like about modern military shooters, and how Bulletstorm's was being made to contrast with them. It's been speculated that Duty Calls was the developers' way of compensating for the lack of a PC version of the Bulletstorm demo, though how much better a job Duty Calls does in advertising Bulletstorm is debatable. It's still funny, though.

For a much more serious Take That! at military shooters, see Spec Ops: The Line.