Recap / The Amazing World of Gumball S2E27 "The Storm" 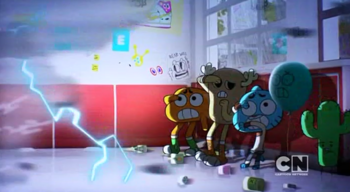 The titular storm.
Gumball: Now, come on! Get angry and fight for your love!
Darwin: Or just get depressed at the sudden realization that Gumball ruined your [Carmen's] life.

Friction is created between Alan (a balloon) and Carmen (a cactus) when they are berated for being sickly sweethearts. Things take a turn for the worse when Masami manipulates Gumball into making Alan her boyfriend.