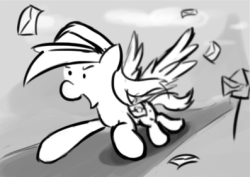 It is Daily! and Derpy!
Advertisement:

Since December 2012, it is featured on the front page of the Derpy Hooves News

New comics became less and less frequent throughout late 2013 and early 2014, until the series stopped updating entirely with Comic #359 in April 2014. The Daily Derp resumed regular turnout in the winter of 2014, but then stopped again with Comic #397 in February 2015. Aside from a double-length comic on April 1st of that year, updates have again ceased.

The Daily Derp contains examples of: