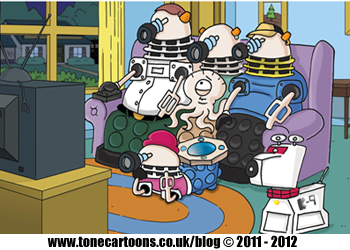 project was begun on May the 9th 2011, by cartoonist and illustrator Anthony Naylor

, a.k.a Tone. It is a browsibly silly, Fanfic comic that is updated daily at around midnight, based on the Daleks from The BBC television show Doctor Who. It features the evil tin can characters from the show in humorous situations, acting out seemingly normal lives while doing quite odd things.

The comic is a single-panel, Science Fiction, Web Comic aimed for that nerdy itch. The author and cartoonist has stated that the main goal of the comic is an attempt to create a full year of situation cartoons featuring Doctor Who's oldest nemesis.

The cartoons are drawn on 100 gm cartridge paper using 0.3, 0.5 and 0.7 ROTRING Tikky graphic pens. To colour the cartoon, LETRASET Permanent twin-tip Promarker pens are used, which give a nice flat colour and blend in nicely. The image is then scanned into Photoshop using 300 dpi to add some shadowing.