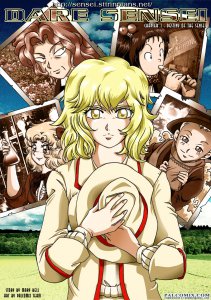 "One domino to the left, things were extremely different..."

Dare Sensei is a comic written by Mary Bell and illustrated by the Palcomix Team that presents a version of Doctor Who as it may have been conceived by Japan. In this dimension, Rassilon visited Earth in 247 BC and returned to Gallifrey with knowledge of the era's most advanced culture: the Japanese. note (That the Japanese can barely be said to have existed as a race, let alone super-advanced or anything like they are today, in 247 BC is another matter altogether. Still, this is an Alternate Universe, so just go with it.)

Said traditions were quickly instituted, with subsequent (re)generations becoming more and more "Japanese". Gallifrey even saw a substantial increase in the female population, which resulted in women holding various positions among the ruling class. While the Japanese appearances continued, the trends and architecture eventually fell out of favor.

One day, for reasons unclear, a Time Lord once nicknamed "Theta Sigma" stole a Type 40 TARDIS and became an exile, soon leading to a particular gravitation toward humans (particularly those of Earth and, more specifically, Japan) and lifetimes spent exploring the universe, righting wrongs and picking up companions along the way to show the wonders of Time and Space. The Time Lord, whose real name has yet to be even so much as hinted at, would henceforth be known only as... the Sensei.

Who is a woman.

The idea of a female Doctor is far from new: Tom Baker had suggested it in the 1970s, and prior to 2017 there had been two BBC-licensed Who works with a female Doctor - The Curse of Fatal Death (a parody for Comic Relief), and Exile (an entry in Big Finish's Doctor Who Unbound audio series where the Doctor doesn't really do much of anything). Fan films, such as they are, have toyed with this concept since the 1980s to varying degrees of success.

And now, of course, the Doctor actually is a woman. Years before the show proper did it, Dare Sensei set out to prove that, given the right conditions, it's Crazy Enough to Work.

(NOTE: The website has since gone down {most recent revision here

, via the Internet Archive}, and it appears to be on hiatus as very little has been done past Chapter 2. Chapter 1 can be read here