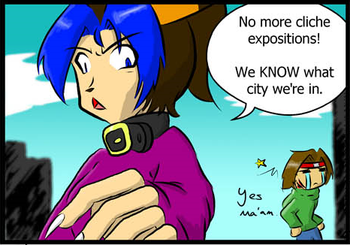 Jaxen: "I think my perspective's shot."
Hidari: "You should probably have that looked at by a doctor."
Advertisement:

by J. Powers follows Hidari Centa and Jaxen Vanderbilt, former stars of a now-dead Gag-Per-Day comic, who despite being buried and left by their creators have emerged into the world "outside" their comic limitations. They now find themselves in The Crossworlds, the place between comics - and have no earthly clue what to do now. So they strive to survive in the best way they know how: as ridiculously as possible.

The Crossworlds is hosted on Foxtail Studios

alongside some other comics that don't exist yet.