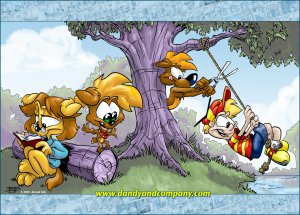 was a comedy, adventure, furry webcomic started in 2001 by cartoonist Dee Fish (formerly named Derrick Fish), and a twist on the standard Boy And His Dog story. The titular character is a sarcastic and fiercely independent talking dog who lives with his owners, the Brooks family, in the suburban area of Loudonville, Ohio.

Dandy's pranks, jabs, and outrageous antics affect the family and basically anyone else who crosses his path, particularly their 13-year-old son Bernard, who spends most of his time at home with his dog. Dandy can be SO biting that when Fish produced a tribute strip to announce the winner of Best Comic in the annual Web Comic Awards, Dandy actually cursed and slapped his butt toward the "camera" in response to his own strip not even being nominated (though, this is an extreme case). Rounding out the cast are Bernard's clueless, jaded parents Mae and George, Dandy's sometimes-girlfriend Maryweather (also a talking dog), and Dandy's younger brother, Mistake. The strip originally started as a Slice of Life comedy with Dandy's actions being the focus, and with the start of the Beanie-Quest saga, quickly introduced a bigger universe of characters, and the more epic, action-adventure side that is inspired by Superhero and science-fiction comic books.

Dandy and Company was written and drawn in the standard Newspaper Comics format, and has been printed into five volumes twice, with the current print done under Lulu Press. Many elements are inspired by Calvin and Hobbes, with the art style reminiscent of the Looney Tunes. Humor is comprised mostly of character quirks, Breaking the Fourth Wall and frequent references to geek culture.

In August 2010, the final story arc of the webcomic was supposed to begin. For the next few years, there were occasional updates to the comic on Dee's various websites, until the comic resurfaced in 2015 and was concluded in 2018.