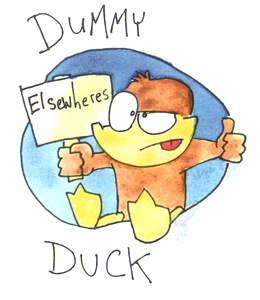 He really is dumb

is a webcomic, started in late 2011 and updating regularly on Mondays. It follows the adventures of Dummy Duck, a duck who is very dumb, his friends Lil' Red the tomato and Foo-foo the dog.

The webcomic is new, bu were previously steadily appearing in what could be called small indy mini comic zines. Most of the comics are gag-based with a central theme connecting them together. They're also characters in a novel, which the story for the webcomic will be based on.

Although Dummy is really dumb, somehow he's completely aware that he's a fictional character. Lil' Red started out as a bad guy, but he realized that he'd get more screen time if he played nice. Foo-foo is the pet dog who has been called the kind of cute that should be illegal. We can see his thoughts through thought bubbles, but he doesn't talk because dogs don't talk. But Lil' Red can usually somehow understand him and explain what he said to everyone else.