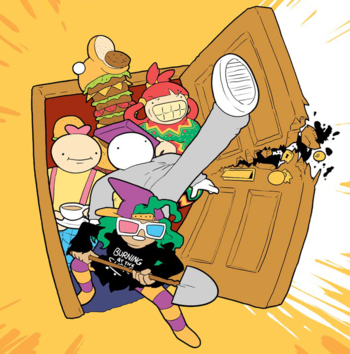 "No doors were harmed in the making of this webcomic." This phrase applies to many webcomics. Not to this one.

, which has been updated... mostly regularly since its first comic

was uploaded on June 13, 2012. The comic is characterized by outlandish hairstyles (if it's in the Scalp folder of the Hair Tropes page, Deathbulge has probably covered it), bowling ball heads (sometimes literally

), and humour your mother probably wouldn't approve of.note There are many, many, many butt jokes.

The comic initially detailed the day-to-day exploits of a fictional band calling themselves Deathbulge, made up of four wackjobs- bassist Simmer, vocalist Bren, guitarist Lennox, and drummer Brovil, along with their manager, Nevin. Emphasis on initially

, as for most of its run it has dedicated itself largely to one-off comics featuring one-off characters, with some recurring favourites such as the Baby Bin Guy and Barry Friendly. Yes, it's that sort of webcomic.

Occasionally, Dan himself appears in the comic, usually accompanied by Ian the buff half-human half-skeleton fisherman (read: a skeleton who is a fisherman, and not a fisherman who specializes in skeletons).

An RPG derived from the comic and inspired by titles such as Final Fantasy, Grandia, LISA and Earthbound is in development. Titled Deathbulge: Battle of the Bands, this game stars a metal band called Deathbulge who find themselves trapped in a cursed and rather literal battle of the bands. Please mind that this is a completely different Deathbulge from the aforementioned Deathbulge, made up of a guitarist named Faye, a drummer named Brov- er, Briff- and the aforementioned skeleton Ian on the bass guitar. Naturally, the battles and class system are entirely music-inspired, but note that it's not a Rhythm Game. It is slated for a 2020 release, but a playable demo was released in 2019 and can be downloaded here

Because the game is still in development, it does not yet warrant its own page; as such, since the game is an extension of the webcomic property, its tropes can be found here for the time being. Spoilers, obviously.

The demo of Deathbulge: Battle of the Bands provides examples of: