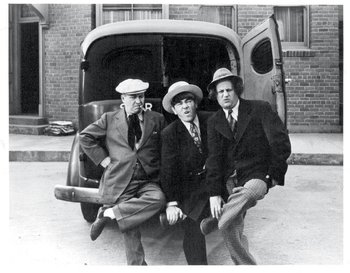 "Are they miracle men or what?"
Fuller: Now, you get me a picture of Prince Shaam, and I’ll give you each a $100 bonus.
Curly: What good is a $100 bogus?
Larry: "Bonus", not "bogus". Don’t you know what bonus is?
Curly: Soitenly, it's Spanish. Bonus notches. Sí sí, señor.
Advertisement:

In their 77th short, the Stooges are mistaken for news reporters of a rival newspaper company to Daily News. After receiving the job, they're tasked to get a photograph of the wealthy Prince Shaam of Ubeedarn. To do so, they infiltrate wealthy socialite Mrs. Van Bustle's home as caterers for her party. Hilarity Ensues.