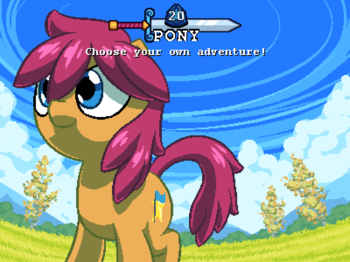 is an Interactive Comic created by Rangelost, based on My Little Pony: Friendship Is Magic.

As the reader/player, you take the role of Trailblazer, a young earth pony with an adventurous spirit, who has just moved to her new home of Hoofington.

The comic is presented in the form of a Role-Playing Game using the d20 roleplay system. Each page of the comic represents a turn of the game; readers can collectively control Trailblazer's actions by submitting them as comments, and a die roll selects which action will be taken on the next turn. Dice rolls are also used to decide the outcomes of actions taken by characters in the game.