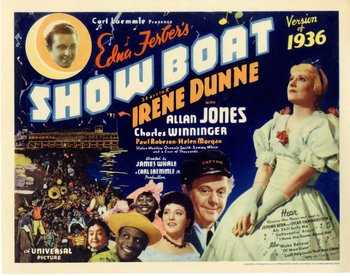 Ol' Man River
That Ol' Man River
He don't say nothin'
But he must know somethin'
He just keeps rollin'
He keeps on rollin' along
— "Ol' Man River"
Advertisement:

Show Boat is a 1927 musical by Jerome Kern and Oscar Hammerstein II, based on a 1926 book. It has been filmed in 1929, 1936, and 1951. The 1936 version was directed by James Whale, who is best known for directing Universal Horror films such as Frankenstein, The Invisible Man, and Bride of Frankenstein.

The story starts with the Cotton Blossom, a showboat with well-known actors arriving in a town in the late 1800s. Magnolia Hawks, the daughter of the showboat's owners, falls for a wandering gambler named Gaylord Ravenal. When the lead actors of the boat are forced to leave due to racial issues at the time (Julie being biracial), Magnolia and Gaylord take over as the leads and become an instant hit.

The musical is possibly most known for Paul Robeson's rendition of "Ol' Man River" in the 1936 version. It is also (arguably) the Ur-Example of the "book" musical as we know it; previously musicals were more like revues and vaudeville.