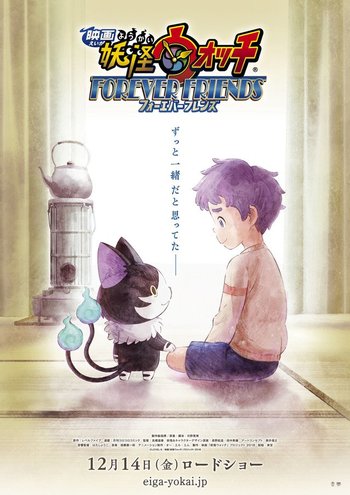 Yo-kai Watch: Forever Friends is the fifth film in the Yo-Kai Watch franchise. It came out December 14, 2018.

The film takes place 60 years before the original Yo-Kai Watch anime. It revolves around a boy named Shin Shimomachi who is chosen by the Yo-kai Watch Elder Zero.

Shin and his yokai friends, Nekomata (a nekomata yokai) and Su-san (an ochimusha yokai) are on a quest to get rid of the evil soul-devouring witch Tamamo no Mae and get back his mother's soul. Shin also befriends Itsuki Takashiro, a boy whose sister's soul was taken by Tamamo no Mae, and Tae Arihoshi, a yokai knowledgeable girl whose family has been involved in sorcery for centuries.

The plot of Yo-kai Watch: Forever Friends revolves around the friendship between yokai and humans. Enma's origin story will also be revealed.