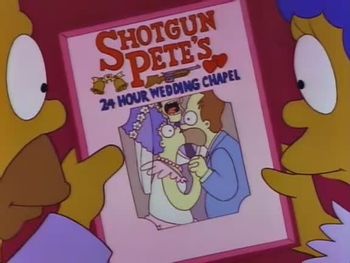 While Marge is at the doctor's to see whether or not she's pregnant for the fourth time, Homer tells the kids the story of his post-high school life with Marge, including how Bart was conceived at the golf course, how they quickly got married at a roadside chapel, and how Homer provided for his new family by getting a job at the nuclear plant.