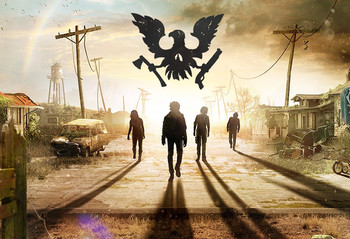 State of Decay 2 is a Wide-Open Sandbox Zombie Apocalypse survival simulator and the sequel to the original State of Decay. Published by Microsoft, it was released on May 22nd, 2018 for Xbox One and Windows 10 (only on Windows 10 store and supports XBOX Play Anywhere which means that the same account logged in can be used to play the game on XBOX One, because of being a Microsoft first-party game).
Advertisement:

Compared to the first game in the series, State of Decay 2 has much more emphasis on being an open-world sandbox. Unlike the first game, there isn't really an overarching plot or main single-player campaign, instead focusing on more free-form gameplay similar to the original game's Breakdown DLC game mode. The game also features up to 4-player co-op gameplay.

The game saw a free Updated Re-release for owners called the Juggernaut Edition in March 13, 2020 including a new area, remastered graphics for the Xbox One X and PC, as well as new gameplay modes and all of the DLC. The Juggernaut Edition also marks the first time the game is available on the PC outside of the Microsoft Windows 10 store (it's available on Steam and other digital distribution sites). The Heartland DLC and Homecoming DLC were released for free on July 19, 2019 and September 1, 2021 respectively. The former added the Trumbull Valley map as an extended story-based mission, while the latter made the map available as a regular region — and expanding the map to include all of the locations from the previous game — and with special scripted missions.

State of Decay 2 contains examples of: