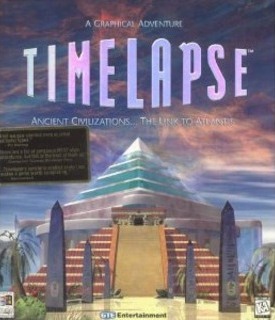 Timelapse is a 1996 Adventure Game by GTE Entertainment, which bears a number of similarities to Myst in terms of visual effects, Point-and-Click based game design and use of logic puzzles. It is now available on gog.com

The story begins with you receiving a message from an old archaeologist friend, Alexander Nichols, who has spent his entire life attempting to prove his theory that the ancient Egyptians, Mayans, Anasazi and Easter Islanders shared a common connection...the lost city of Atlantis. Nichols reveals that he has at last found proof in the form of a mysterious time machine on Easter Island that provides access to major sites of each civilisation at a different point in time, and implores you to join him as he tests it.

By the time you reach Easter Island, Nichols has already attempted to use the machine, and has become trapped in it somehow. With no other way to rescue him, you are forced to use the machine to venture through the various ancient worlds, solving the puzzles in each location and slowly discovering exactly how Atlantis is linked to each. In addition to this, it soon becomes clear that you aren't the only person travelling to each world...