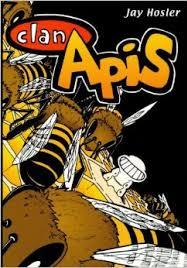 "BEE all you can BEE!"
"But trust me, Nyuki. When this is all over and you crawl out of this little cell, you'll never feel alone again."
— Dvorah
Advertisement:

Clan Apis is a 2000 graphic novel by Jay Hosler.

Focusing on the teaching of bees, it tells the story of a young bee name Nyuki and her struggles to make something of herself in the hive. Along the way, she meets several other bugs; some helpful, others hungry. She eventually decides to stay inside the hive, not wanting to die. Soon, however, she comes to learn just what being a bee is all about.

Also released in full color under the title "Way of the Hive: A Honeybee's Story".

Compare Crimsons – The Scarlet Navigators of the Ocean, for a similar manga about salmon.