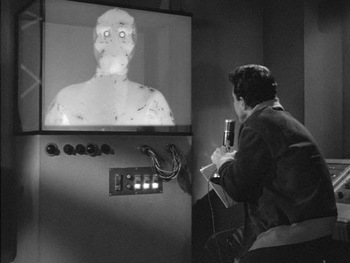 Allan converses with the Andromedan.
This episode has no opening Control Voice narration.

The Outer Limits (1963) made its debut with this tale of First Contact.

KXKVI is a radio station in southern California owned and operated by the Maxwell brothers, Gene (Lee Philips) and Alan (Cliff Robertson). Alan's wife, Carol (Jacqueline Scott), also works at the station. Lately, Alan hasn't been attending to his duties because he shuts himself away in a transmitter shed, experimenting with the station's controls, hoping to make contact with extraterrestrials. Carol and Gene oppose Alan's tinkering, because his experiments will cut funding from the station sponsors, and his obsession is interfering with Alan and Carol's marriage. Carol also reminds her husband that there will be a banquet held in his honor tonight.

Sure enough, Alan's efforts pay off as a creature from the Andromeda galaxy, a glowing humanoid made of pure energy, appears on Alan's interstellar scanner. He's made First Contact! With the help of technology, Alan is able to translate the Andromedan's speech as a reedy, metallic drone. They begin a conversation about the nature of life on their respective planets, such as the question of whether the alien believes in God or a higher being. (The answer: "Infinity is God. God, infinity, all the same.") They also discuss how they're both breaking the rules by communicating with each other, since the being's society forbids contact with other civilizations. This historic discourse is interrupted when Carol and Gene (who don't know about the alien) remind Alan about the banquet (again), which he never cared about but has no choice but to attend. Alan tells the Andromedan that he'll keep the channel open at a certain dial, asking the Being to stay where it is until he returns.

Another DJ, Eddie Phillips (Burt Metcalfe), is Gene's substitute during the banquet. Alan warns Eddie not to tamper with KXKVI's power settings, but as soon as the Maxwells leave Eddie boosts the station's signal anyway. This also increases the power of Alan's telescreen, which has the unexpected side effect of teleporting the Andromedan across space and right into the transmitter shed! Alone on this alien world, the Being leaves to search for Alan. Because it's made of pure energy, it unintentionally wreaks havoc throughout the town, causing a lot of damage in its wake and even burning some of the townspeople with radiation (including Eddie, who is the first casualty). The alien finally makes its way to the banquet, where Alan tells it to return to the shed. However, the local police and the military, who have been called in to stop the creature, accidentally shoot Carol. Fortunately, the being uses its radiation to cauterize her bullet wound, saving her life. Unfortunately, the authorities aren't convinced of the Andromedan's peaceful intentions, so it stops their bullets with radiation. It then admonishes the humans: "I have told you not to use force. Now I warn you — there are powers in the universe beyond anything you know." It proves its point by destroying KXKVI's transmission tower with a wave of its hand, which calms everyone down long enough for it to give a message to humanity: "There is much you have to learn. You must explore. You must reach out. Go to your homes. Go and give thought to the mysteries of the universe. I will leave you now, in peace."

So what happens to the Andromedan now? Nothing good, since it can't stay on Earth or return to its own planet. It stoically explains what it must do to Alan.

The alien deactivates the transmitter's power, which causes it to vanish. In its wake, it leaves behind a world forever changed.

The Control Voice: The planet Earth is a speck of dust, remote and alone in the void. There are powers in the universe inscrutable and profound. Fear cannot save us. Rage cannot help us. We must see the stranger in a new light — the light of understanding. And to achieve this, we must begin to understand ourselves, and each other.

"There are tropes in the universe beyond anything you know":