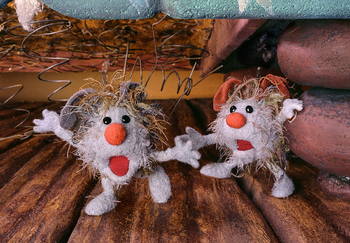 Even your couch can be home to sentient life.
"Now, if you excuse me, it's dust bunny season and I'm hunting wabbits."
— Deadpool, Deadpool 2
Advertisement:

In real life, "dust bunnies" are clumps consisting mostly of dust, loose carpet fibers, and (if there's a pet in the house) shed fur that form over time when a piece of furniture has not been cleaned underneath. But in fiction, dust bunnies are often depicted as creatures that live underneath furniture. They will often be portrayed as rabbit-like, to fit in with their name.

In most works featuring dust bunnies, the characters will be depicted as being scary and mysterious because of where they are often found. On rare occasions, fictional dust bunnies can be friendly. They also may be found living in the Trash of the Titans.