Dying is easy. Anyone can throw themselves onto the pyre and rest a happy martyr. Enduring the suffering that comes with sacrifice is the real test.
—Stormdancer 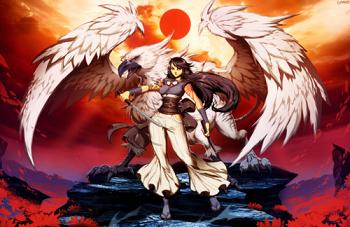 Remember, kids. Don't endanger forests and animals. Or this girl will kill you. And eat your soul.
Advertisement:

A fantasy trilogy by Jay Kristoff, the first novel Stormdancer was released in 2012.

A feudal steampunk Japan. The Shima Islands have gone to the dogs. Toxic fuel is wrecking the environment, a religious group called The Lotus Guild is executing those they deem "impure," and the place is ruled by a selfish, power-hungry shogun. He sends two warriors out to capture a thunder tiger for him. One is Masaru, the shogun's chief hunt master, and the other is Yukiko, Masaru's daughter and the heroine of the story. As far as Masaru and Yukiko are concerned, they've been banished, as Griffins are supposedly extinct, thanks to the copious pollution. But no matter how impossible the task given, if you fail it, the shogun will execute you. Suddenly, though, Yukiko ended up separated from her dad and wandered alone in the wilderness. Then, she saved the life of a griffin named Buruu in need of her help, since its wings were broken and it was unable to fly.

Meanwhile, Masaru is accused of treason and imprisoned, and Yukiko has to rescue him. But unfortunately, she's in for a hard, dangerous road. Although she rescued Buruu, he feels a deep contempt for her, making it hard for them to work as a team. Making matters worse, her ability to telepathically speak with animals puts her on the Lotus Guild's most wanted list. To save her father, as well as take down the shogun and the Lotus Guild, she must gain Buruu's trust and enlist the aid of several allies, in order to save her homeland from chaos and corruption.