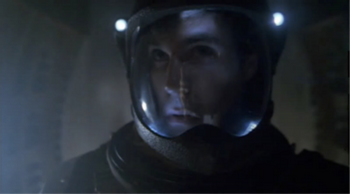 The episode opens with the crew playing a wild basketball(-ish) game in the cargo bay while Simon, River, and Inara watch from the railing. Suddenly, the ship's proximity alarm goes off, indicating that A. Serenity is nearing another ship and B. Wash isn't doing his job. As Serenity approaches the stationary transport ship, the body of a passenger strikes the cockpit, indicating that whatever happened, it wasn't exactly nice.

The crew decide to board the derelict transport. Since the ship is empty, the crew goes on to plunder its contents. As it turns out, everything in the ship is fine, with one small exception: the passengers and crewmembers are dead and their bodies are hung from the ceiling. This understandably unnerves the crew, especially when they recognize it as the handiwork of Reavers.

Elsewhere in the ship, Jayne is searching every corner for loot—you know, business as usual—when some douche suddenly comes out of the darkness and attacks him. Fortunately, Mal knocks him out and the crew puts him in Serenity's medical bay. The man is the sole survivor of the Reaver attack. Though physically unhurt, his psychological condition is rather worrying. Finally, the crew prepare to leave, but the Reavers have booby-trapped the derelict ship with a trap rigged to blow up any docking ship. Damn. Fortunately, Kaylee manages to disarm the trap.

Soon enough, an Alliance warship decides to crash in, bring the crew into their custody under suspicion of hiding dangerous fugitives Simon and River Tam (whom the crew have given spacesuits and told to cling to a window), and once they find the sole survivor cutting his face up, accuse them of torturing him. The survivor is then brought to the medical bay for treatment, but the medics fail to notice that he's hidden a knife...

The news gets through, and Mal offers to help the Alliance troops search Serenity for the survivor. After a while, the guy comes out of hiding and attacks them, but fortunately Mal manages to snap his neck. The Alliance troops, being grateful, decide to leave the crew without any charges. However, being proper bureaucratic individuals, they also confiscate Serenity's cargo.