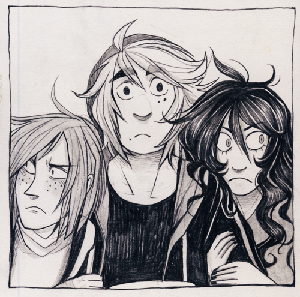 Why are we scared again?
Advertisement:

, aka Prace, is an ongoing webcomic "about friendship and adventure", by a Finnish artist Petra Erika Nordlund, better known as LEPPU. Its update rate is somewhat irregular.

The story (not counting the prologue) begins when Leona, a jobless belle, and her neurotic friend Colin buy a poster labeled "Prague Race" from a strange shop that is manned by even stranger people. Soon enough odd roach-like creatures start appearing all over Leona's apartment and the group of friends (with gentle animal-lover Miko completing the Trio) find themselves involved with weird shenanigans that surround the shop, and the "other side" that it appears to be a portal to.

The author's DA and Tumblr account are filled with sketches and additional art that promise a lot for the story to come. Leppu's DA account is here

As of 2021, the comic has been taken down by Petra, who expressed no desire to finish it or leave it up for reading. And so they could focus attention on their other comic, Tiger, Tiger.