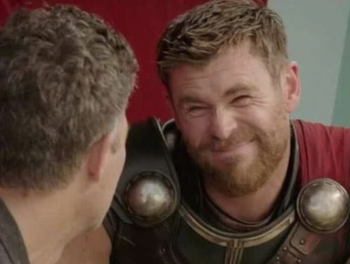 "Yeah, Banner's powerful and memetic, too." "Is he, though?"
Loki Actor: Sorry about that meme with TV Tropes. I just couldn't help myself.
Thor Actor: I know.
Loki Actor: I'm a Troper!
Thor Actor: [smiles proudly] So mischievous!
Advertisement:

Loki: "I have been troping... for thirty minutes!"note That's still relatively tame, believe it or not.