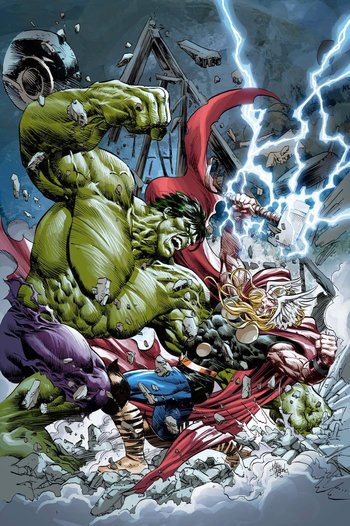 "Rock giants crumble under the blow of the mighty Mjolnir. I fear this brute won't be as obliging..."
—Thor, Ultimate Avengers
Advertisement:

A recurring rivalry where an almost unbeatable warrior who has more than enough years of battle experience up their sleeve is pitted against a contender who is probably too angry to know who they are dealing with, yet possesses enough power to give the former a run for their money.

The main characteristic of this type of matchup is the contrast between these two opponents. The warrior often has an aura of nobility around them, and has earned the respect and fear of both enemies and friends alike. They easily surpass all others on the setting of the work — with many comparing them to a Physical God if they already aren't one — using not just their own strength, but also their intelligence and wit to gain the upper hand in a fight. The warrior knows this, and can often be quite smug about their skills. If in spite of their power they are shown to be humble, expect them to be a virtuous and exemplary heroic figure, that simply talks down to their enemies because they don't want to hurt them.

On the other hand, the berserker is practically considered a force of nature, not truly aligned to any faction. A raging juggernaut with an often monstrous appearance, that can plow through everything and everyone, earning such a fearsome reputation that anyone in their right mind would prefer to stay the hell out of their way. They either aren't very intelligent, or are too blinded by rage to think properly, but may also show an unexpected degree of cunning given their behavior. Even so, their greatest assets are their monstrous brute strength, sheer force of will, and a knack for shrugging off nearly everything you can throw at them, as well as making everyone tear their hair out and scream "JUST DIE ALREADY!!!"

Usually, when these two confront each other, the first has a greater variety of powers that would normally allow them to flatten any other opponent, yet the berserker is capable of catching their rival off guard by taking hits head-on and keeping the warrior on their toes with their sheer durability or velocity, or showing a level of grace and battle skill that no one would expect of a practically mindless beast. As the fight drags on, the arrogant warrior cannot fathom how such a lowly animal can be a match for them, and the berserker will get increasingly angrier at the fact that they can't just simply squish this particular nuisance like all others. At this point, they will be more of a danger to their surroundings than to each other, because the more they both let loose, the less aware of the world around they will become, and the more apocalyptic the landscape will look.

You can expect these two to fight each other several times throughout the story, because either are too powerful as to be permanently put down by the other, or one is needed to keep the other in check and maintain the narrative balance.

It should be noted that in the story of The Epic of Gilgamesh, the proud demigod king Gilgamesh found a Worthy Opponent and eventual friend in the beastman Enkidu by brawling with him, making this dynamic Older Than Dirt. Some things just never change.

Compare and contrast with Force and Finesse, Weak, but Skilled, and Unskilled, but Strong; in this case, the warrior is the weaker one that relies on trickery and skill, while the berserker is the stronger one that relies purely on brute force. See also Soldier vs. Warrior, Technician vs. Performer, Tiger Versus Dragon, and Chevalier vs. Rogue for other martial matchups that use the same theme. A lot of times, many Fur Against Fang rivalries end up becoming this.