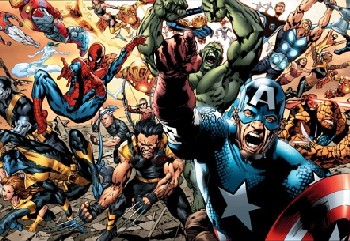 "Crime is becoming super-crime. Terrorism is becoming super-terrorism. Even the fattest, most stupid politician on Capitol Hill realizes that Son of Star Wars is going to be useless against the kind of problems America's really facing out there."
— Nick Fury, The Ultimates #2
Advertisement:

The Ultimate Marvel (Earth-1610) comics started as an Adaptation Distillation of the classic stories of Marvel Comics, but set in a new continuity rather than the old Marvel Universe.

Back in the Turn of the Millennium things were not going well for Marvel. New readers were forced to be up to date with a Back Story that goes back to the 1960s, with plots that started one way, were Retconned into something else later, and then retconned back so frequently that not even the writers themselves could keep track and caused frequent Continuity Snarls. The usual tropes of the superhero genre, such as the suits with bright colors, the characters with corny names and the general Fantasy Kitchen Sink had been a boom in the 1960s but did little to get new readers on board. Even more, The Dark Age of Comic Books was fading as well. As for bringing readers from other media, Marvel never had a good reputation for film adaptations at this point, and the acclaimed FOX animated series were followed by failures such as Spider-Man Unlimited and The Avengers: United They Stand. Not a good time.

The idea of the new project was to release comics based on the characters in their initial and basic premise, set in a more realistic world and with a down-to-earth approach. Unlike previous reboots, the comic started from scratch, and not as the result of some major event in the main universe (such as Heroes Reborn or Age of Apocalypse), and the original comics were not replaced but kept being published concurrently. Even more, this new universe would be off-limits to interdimensional crossovers. To ensure that the comic would have a fresh view, Joe Quesada hired Brian Michael Bendis, who had never worked for major publishers before, and started Ultimate Spider-Man in 2000. This comic was complemented by Ultimate Marvel Team-Up, which introduced some other characters reimagined in the Ultimate style.

Spider-Man was followed by the Ultimate X-Men, by another rising talent, Mark Millar. As Millar had a superficial knowledge of the X-Men at the time, he based a large part of the initial design on the recent X-Men film, including the leather suits. It was another success, and Marvel proposed he write a spin-off comic based on Wolverine. Millar, however, preferred to make a reimagination of The Avengers, who were not among Marvel's highest-selling titles back then. This led to a conflict with Kurt Busiek, the ongoing writer of the Avengers, who felt that his work would be shadowed by the new comic, so Marvel tried to appease him by naming it The Ultimates instead of "Ultimate Avengers". The comic, focused on SHIELD spies and geopolitical crises, was an even greater success. Ultimate Fantastic Four was also released, to explore the science-fiction angle. Ultimate Marvel Team-up was canceled and the line moved to a new system of Worldbuilding: the four series mentioned were complemented by limited series that provided crossovers, introduced some special stand-alone story, or both.

Ultimatum was the first general Crisis Crossover of the line. It was meant to be a Kill 'Em All event, and be followed by a reboot; but it was later decided to keep it canon and continue the comics in its aftermath. It was not well received, as it caused the death of several important characters, including the four "sacred cows" of the X-Men (Xavier, Magneto, Wolverine and Cyclops). Although those characters had been dead before in the main comics, this was the first time that they were dead at the same time. This was followed by even bolder changes: Reed Richards has a Face–Heel Turn and turns into the new Big Bad, and Peter Parker is killed, so that a new guy, Miles Morales, becomes the new Spider-Man. Hickman's Ultimates were not as successful as Millar's, but were welcomed as a return of the Ultimate line to its former quality, and Miles Morales proved to be the highest success of the whole line. Morales had the first crossover of the Ultimate Marvel universe and the main Marvel universe in Spider-Men. As sales were declining there was a new Crisis Crossover, Cataclysm: The Ultimates' Last Stand, against the universe-displaced Galactus. The last three titles were Ultimate FF, Ultimate Spider-Man, and a new Ultimates team composed of street-level superheroes.

The universe ceased to be published in 2015 during the Secret Wars (2015) Crisis Crossover, following the arc of The Avengers (Jonathan Hickman) about incursions between universes. The regular and the Ultimate universes clashed in the last incursion and were destroyed, while Dr. Doom got godlike powers and created a battle world with domains composed of the few realities he could save. One of those domains was the New York of both universes combined into a single one and with all their heroes (including duplicates). This was detailed in Ultimate End, the last Ultimate Marvel story. Miles Morales played an important role in the main story, and when the main universe was restored the Molecule Man made sure that his family and friends were "transplanted" to it as well. Although he was the most important one, with his own comic book and more key roles in subsequent crisis crossovers, Miles was but one of the several canon immigrants that were moved to the main universe; Jimmy Hudson was also incorporated in X-Men: Blue and The Maker would be a featured villain in several series. Brian Michael Bendis would later bring back the Ultimate Universe in his Spider-Men II miniseries. The fate of the Ultimate universe would become an ongoing subplot years later in Miles Morales: Spider-Man and Venom (Donny Cates).

No relation to the Ultimate Spider-Man (2012) cartoon show, though like most every other Marvel adaptation since the Turn of the Millennium it incorporates a few Ultimate comics elements. Both Ultimate Spider-Men would meet each other and join forces as part of the Spider-Verse event (in both comic and animated versions), however.

Major series in the Ultimate Marvel Universe are

Phase 1note From the beginning to Ultimatum

Phase 2note From Ultimatum to the death of Spider-Man

Phase 3note From the death of Spider-Man to Cataclysm

Characters with their own pages