Literature / My Family and Other Animals 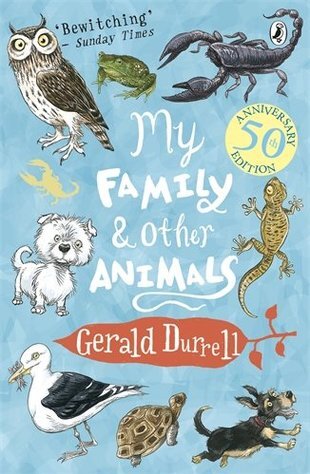 "This is the story of a five-year sojourn that I and my family made on the Greek island of Corfu. It was originally meant to be mildly nostalgic account of a natural history of the island, but I made a grave mistake in introducing my family into the book in the first few pages. Having got themselves on paper, they then proceeded to establish themselves and invite various friends to share the chapters. It was only with the greatest difficulty, and by exercising considerable cunning, that I managed to retain a few pages here and there to devote exclusively to animals."
— Gerald Durrell
Advertisement:

My Family and Other Animals (1956) is a hilarious semi-autobiographical account by British naturalist Gerald Durrell of his childhood spent living with his family on the Greek island of Corfu between 1935 and 1939, as well as various fauna of the island. Each of Gerry's family, as well as other characters, have their own idiosyncrasies, which help to make this one of the funniest books ever written. There's his long-suffering, widowed mother, who never seems to be surprised by anything; eldest brother Larry, who became another famous writer

It has two sequels, Birds, Beasts and Relatives (1969) and The Garden of the Gods (1978), though these are not nearly as famous as the original. It has been adapted at least three times for television: as a 1987 BBC miniseries (starring BRIAN BLESSED as Spiro), a 2005 BBC Made-for-TV Movie (starring Eugene Simon as Gerry and Imelda Staunton as Louisa), and the 2016–19 ITV series The Durrells (starring Keeley Hawes as Louisa). It was also adapted for the stage in 2006.

This contains examples of the following tropes: