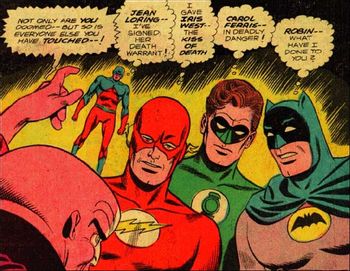 Lord knows where they got it from, but many people interpret Batman as having plenty of Ho Yay. One Moral Guardian, Frederic Wertham, famously claimed that it was "homosexual propaganda". Some later writers intentionally joked around with this. Reputedly, this (plus the spandex-clad TV series) is how the name "Bruce" became associated with homosexuality. (Of course, his original ward's name is suggestive enough on its own.) Grant Morrison claims homoerotic themes have been present in Batman from the beginning. Hell, Wikipedia has a page on it